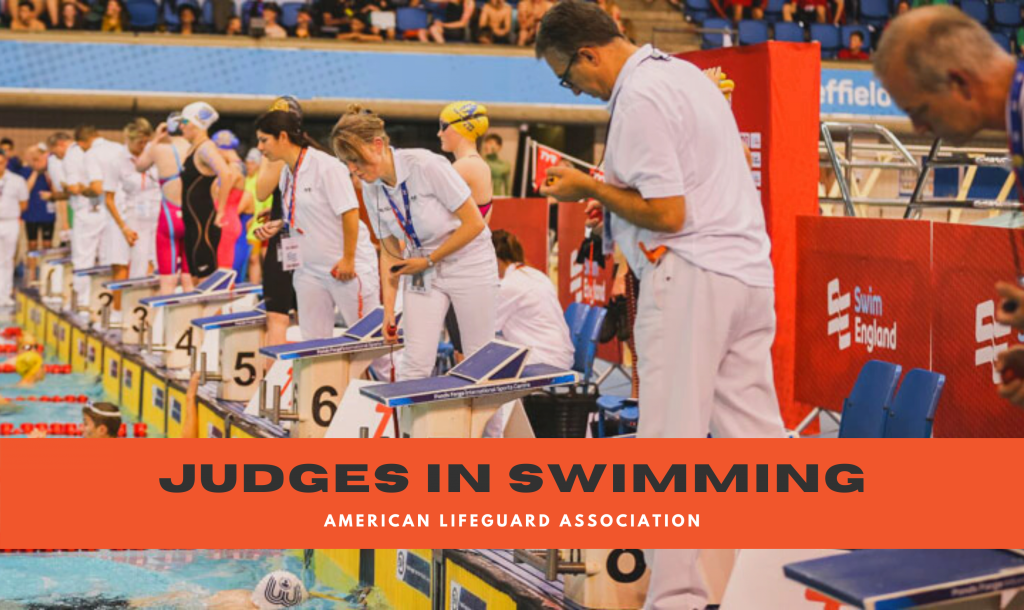 Judges in swimming: what are their duties?

Have you stopped to observe the performance of the judges in swimming competition? We explain what its functions are.

As in most sports, organizing competitive swimming events requires people to do justice to it. Although they often go unnoticed, the role of judges in swimming is really important. We tell you about their duties and functions!

The image we have of referees in different sports usually includes them as just another actor on the field of play. This is the case in traditional sports such as football, basketball, rugby, or handball.

However, in other disciplines, such a  Ls swimming, they go almost unnoticed. This in no way means that their role is less relevant. Learn about everything the judges do in swimming in each of the competitions!

May you also interested to read about: Adapted swimming and Lifeguard training: how is it practiced?

Judges in swimming: how many are there?

In swimming, there is not a single person in charge of controlling that everything is developed under the rules that govern this sport. In fact, there are several referees in each event and each of them has a particular role. In this way, we can differentiate:

Referee: he is the general person in charge of the control. Signal with a whistle for swimmers to get ready and take their positions on the starting grid or in the water. Once all of this is done, he reaches out and delegates responsibility to the starter.

You may Also Like :  Benefits Of Virtual Assistant Services For Ecommerce Businesses

Starting judge: as its name indicates, it is responsible for ordering and controlling the start of each race. It is placed to one side of the platforms and is the one who gives the order to execute the exit, in addition to deciding if it has been valid.

Lap inspectors:  there is one per lane at each end of the pool, this means that there can be up to 16 of them. Your task is to check that the competitors make the full course and that the turns are made correctly.

Style judges accompany the swimmer on his journey. They check that the requirements and technique of each style are met and also help the judges back with the turns.

Finish judges: they may or may not be there, as this aspect can be automated. Its function is to supervise the arrival of the swimmers to the finish line.

Other judges in competitive swimming

To those we previously named, we can also add other functions somewhat more linked to administrative matters, as detailed in this Judges Manual.

The task of the annotators is included here, who is in charge of organizing, communicating, and certifying the results and records obtained. It also includes the timekeepers, who are responsible for each swimmer’s time (this is automated in high-level competitions today).

Likewise, we must also appoint the senior officer, who checks the state of the track and the swimmers’ clothing, among other issues; and the person in charge of the false start rope, who stands at a certain distance from the start to indicate, together with an audible signal, that there has been an invalid start.

Punitive powers of judges in swimming

One of the most important responsibilities of these referees is to sanction athletes who do not respect the rules in a competition. These sanctions are communicated immediately and there is, from that moment, a period of 30 minutes for the affected party or their representatives to make the pertinent claims.

Disqualifications and other less serious sanctions are in charge of the referee of the competition. There is the possibility that it is he himself who observes the infraction or that it is reported by one of the competition officials. In the latter case, the final decision will be made by the head referee.

Also read about: Why a Gym Is Essential to Keep Your Body Fit?

To conclude, it is appropriate to clarify that the judges must wear clothing that identifies them and must have the necessary material to perform their role in each competition. This is generally left to the organizers.

On the other hand, there must be effective communication between them, as well as good treatment of swimmers. Assistants to the head referee inform you of rule breaches in a post-competition report. The test, the series, the lane, and the foul committed are detailed in this.

In events where there is an announcer or entertainer, it is essential that the referee does not allow him to replace him in his tasks, for example, when announcing the preparation of the athletes.

In short, being a swimming judge is a huge responsibility that requires effort, concentration, and commitment. Respect and the pursuit of sports justice must be above any other value in the case of these collaborators, who are often ‘forgotten’ at the end of the day, but essential for everything to turn out in the best way.

To prevent drowning, it is essential to know first aid techniques to apply them in case of emergencies. In this sense, resuscitation maneuvers such as CPR techniques can save lives in critical situations.

These tools are often dismissed because they are experienced swimmers or highly trained for these competitions or best in  lifeguard training. However, we never know what circumstance may appear – such as a cramp, muscle ache, or even more serious failures in other functions of the body – and thus cause an emergency situation.

You may Also Like :  Why Fake Phone Numbers Are A Smart Way To Stay Safe Online?

In short, there is no doubt that swimming accompanied or even in a group is in itself an excellent measure. However, when it comes to open water swimming safety, all the precautions we can take are adequate.